What Happened to TheDirty.com? Was Their Website Shut Down? 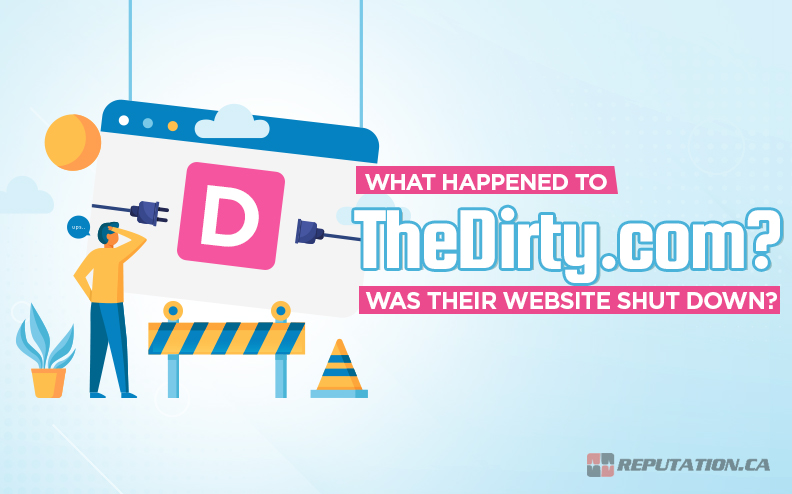 The internet is full of websites designed to prey upon others. Some of them are actively malicious, some of them are meant to phish information, and still, others are essentially set up for blackmail. Few of them are as long-lived or as detrimental as TheDirty.

What Is (or Was?) TheDirty?

TheDirty is a website dedicated to, basically, libel. It’s written defamation, attempting to damage the reputations or lives of individuals who have somehow wronged the people submitting the posts.

“Libel is the publication of writing, pictures, cartoons, or any other medium that expose a person to public hatred, shame, disgrace, or ridicule, or induce an ill opinion of a person, and are not true.” – AP.

The stated mission of the site is to “reveal the truth” about individuals who may present a clean façade but who are, secretly, dirty in some way. While the idea of unmasking scammers and warning others away from them may seem noble, the reality of TheDirty is very different. 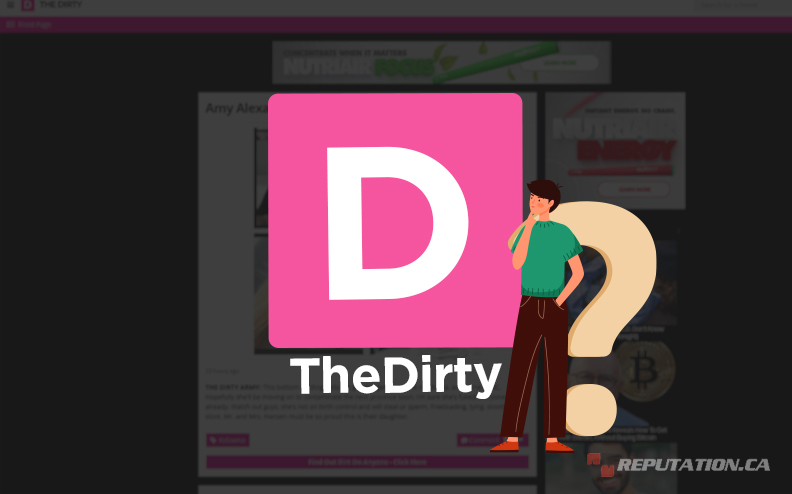 TheDirty very quickly devolved into a site dedicated to shaming and insulting people, primarily women, for their behavior. Whether or not there’s any truth to a situation, TheDirty would allow anyone to post a name-and-shame rundown of their supposed experiences. There’s very little or nothing in the way of verification, and posts are typically laden with misogynistic language and insulting implications.

Perhaps ironically, the individual behind TheDirty, Nik Richie, fits many of the criteria the people posted on the site fit as well. Allegations of blackmail, fraud, and other issues plague his career. Over the years, TheDirty has adjusted to pressures from law enforcement, federal legislation, and search engine algorithm changes simply to stay afloat.

For obvious reasons, no one wants to search for their names online and find a result on TheDirty. Regardless of whether a story has any truth to it or not, many people will make a judgment based on the presence of a result. This is why services that get posts removed from TheDirty are so popular.

If you’ve taken to Google recently looking for TheDirty, you might have noticed something: it’s not there. Even if you know a post exists, when you search for it, it will not show up.

However, if you were to visit TheDirty.com directly, you will find that the site still exists and is still being updated. So, what’s going on?

What appears to have happened is that Google has decided to deindex TheDirty.com.

The way Google works is that it sends bots out to all corners of the internet, copying and analyzing the pages they find. This analysis then allows them to make determinations as to the relevance and topics of a given site or a given page. When you search for a keyword, that keyword search goes to Google’s index, where the most relevant content for that search is then shown to you.

Some aspects of a site can make that site ineligible for inclusion in the index. These can be voluntary or involuntary. For example: 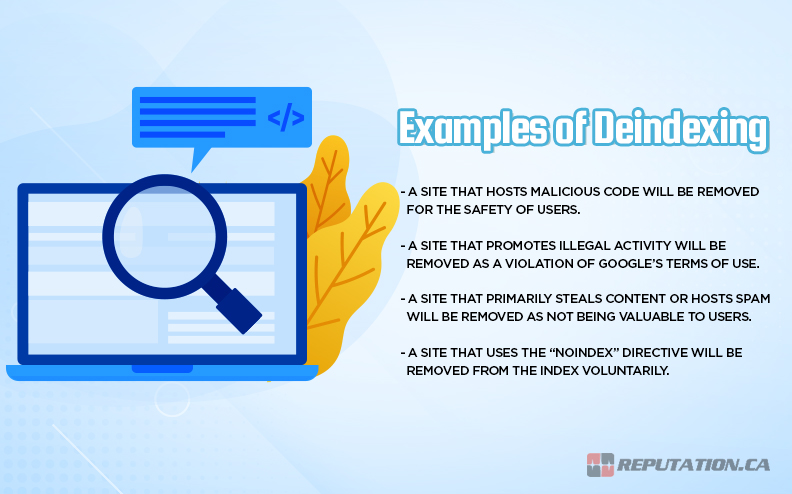 When a site that was once visible in Google search results is suddenly no longer visible, but the site itself still exists, it has been removed from the index for some reason or another. In the case of TheDirty, it’s very unlikely that the site was removed voluntarily. Thus, Google has either detected new violations, changed its policies, or made the manual decision to remove TheDirty from its search results.

There are many reasons why a site might be deindexed. TheDirty may have fallen under several categories, such as: 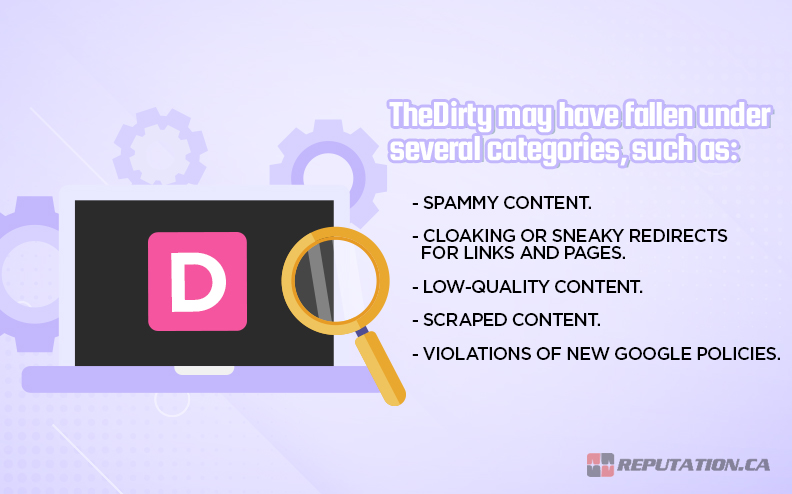 Given that the site has existed for years, it’s most likely that Google has decided to crack down on gossip and revenge sites. As public concerns over fake gossip, libel, and revenge content grow, Google has been slowly adopting more and more policies to remove content that causes outrage for no discernable benefit. Given that TheDirty is primarily used to defame and attack people, with little to no verification of fact, it’s not a site Google likely wants to keep around.

Will TheDirty Ever Come Back?

If TheDirty isn’t visible in search results, the next logical question is to ask whether or not it will ever come back. After all, if it doesn’t come back, do you even need to worry about a post that’s on the site? 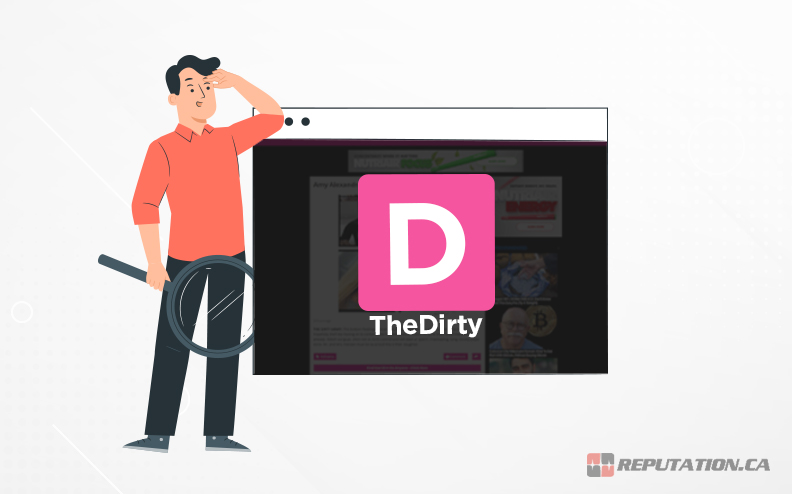 Unfortunately, there’s no way to tell without access to the internal analytics and Google account for TheDirty what, specifically, the problem is. If it’s a simple matter of a few pieces of content that could be removed, TheDirty could be back within a week. If it’s trouble with the entire business model or site structure, it could take months before it returns, but it could still return. If the site has been specifically found to violate Google policies, they may not ever let it return, at least not without significant overhauls.

TheDirty could come back, or it might not. There’s no way to tell. Only the people who have access to the Google Search Console reports for TheDirty can reveal what has caused their removal and how difficult it would be to fix. However, given how much money it likely makes Nik Richie, chances are he’ll try to get it back sooner rather than later.

Should You Still Get Posts Removed from TheDirty.com?

If TheDirty is gone, should you still get posts removed from it using a service like ours? 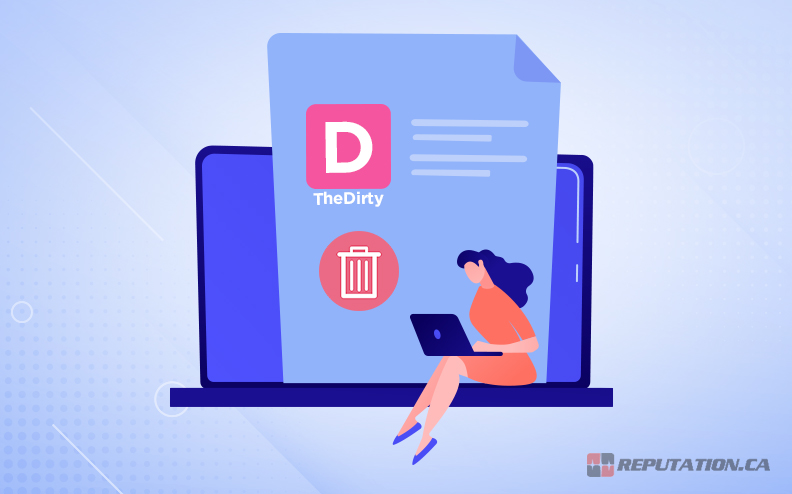 The answer is yes, and there are four major reasons why. By the time you’ve read through them, you’ll agree with us that any post on TheDirty should be removed ASAP.

As mentioned above, if you go to TheDirty.com manually, the site still exists. The site itself is not down or removed; it has simply been removed from Google’s search results.

What this means is that anyone who is already aware of and who wants to check TheDirty can do so. The site still works, and the site search still works, so anyone searching for you specifically on the site can still find you. 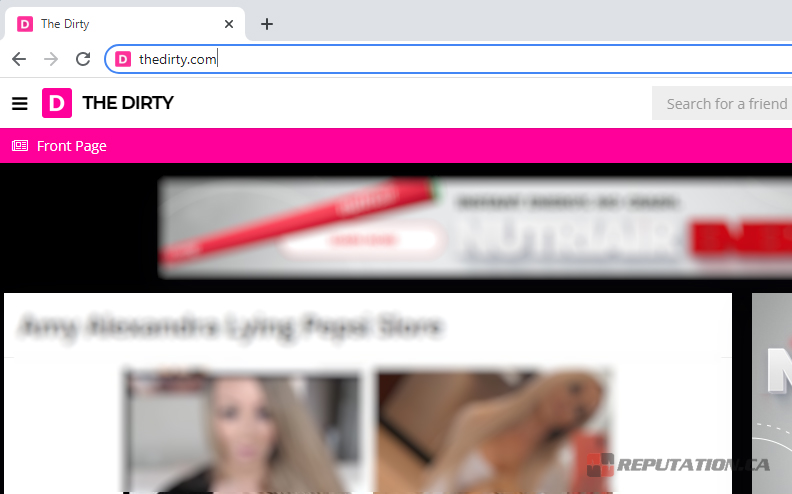 Now, you might wonder why you should care about the opinions of anyone who searches gossip sites. The trouble is, rumors have a way of spreading, and they can hurt your reputation, regardless of the truth involved. People love to brigade and cancel each other these days, regardless of the facts of a situation.

Even if you’re not at risk of losing your job, you may find it harder to get a new one if a background check brings up a post on TheDirty. You also simply have to spend a lot of time worrying about such posts and refuting them with everyone you meet, and that takes a lot of time and energy. It’s better to get the posts removed instead.

Reason 2: TheDirty could come back.

As stated, there’s no way to tell whether or not TheDirty will come back. It’s possible that they could make a few changes, delete a few old posts, and be back within a month. As long as the site still exists, it’s possible that it can come back. 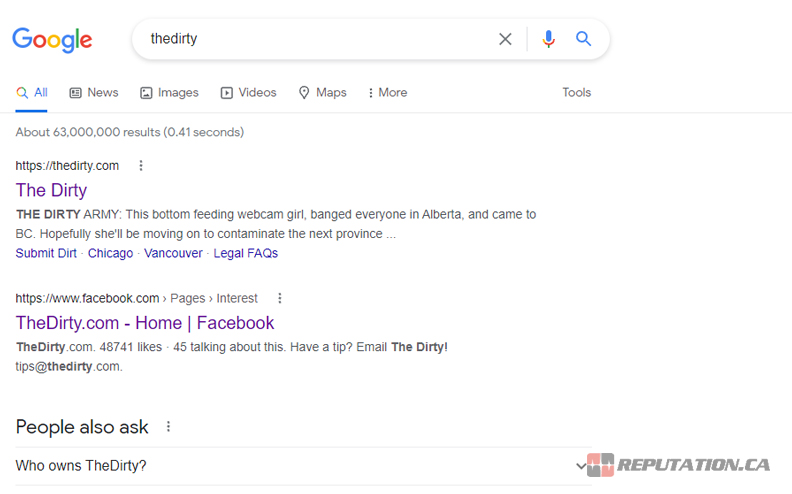 It’s also possible that the site could rebrand and come back under another name. A common technique for spammers is to simply change the URL of their site since Google works by indexing according to URL and domain name. In that way, the site could gain new life for months or even years before it is removed again for the same violations that got it removed in the first place.

If TheDirty comes back, it will once again become a priority to have posts removed from their ledgers. Thus, it’s often better to be proactive about removing posts if they appear.

Reason 3: Other search engines still show TheDirty in their results.

Unfortunately, while TheDirty does not appear in Google search results, it’s only Google that has removed them from their index. 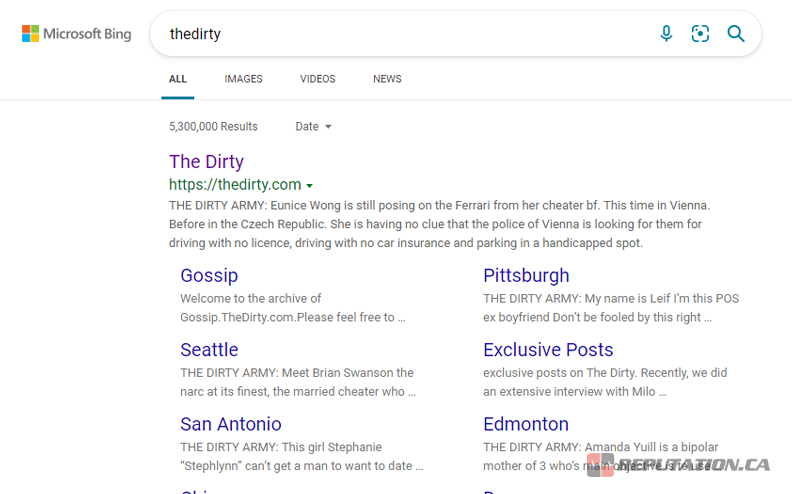 While Google has 92% of the search market share globally, 8% of the population of the world is still 640,000,000 people. That’s a lot of people who still have access to TheDirty with no restrictions.

It’s possible that the violations that caused Google to remove TheDirty will be reflected in the other search engines. It’s also possible that they won’t be. You can never rely on a major corporation to act in your best interests. Bing, Yahoo, DuckDuckGo, and other search engines have no real incentive to follow Google’s lead here, so they may never remove TheDirty themselves.

If you were to visit TheDirty and copy a post title, then search for that, you’ll likely find that many other sites exist that mirror the content.

Sites such as CheaterDiaries, TheWrongDoer, WorstGoldDiggers, FoulSpeakers, and a whole host of other gossip sites either syndicate or outright copy content from TheDirty. This serves to further spread rumors and make content accessible even if TheDirty itself isn’t visible. Many of these sites copy their content from TheDirty, so if you can proactively get a post removed from TheDirty, you may be able to do it before it gets copied across other sites. 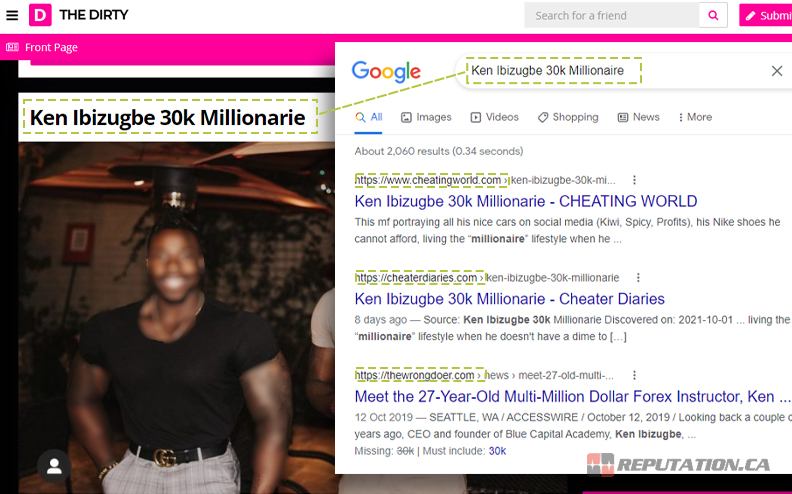 Suffice it to say that there’s no reason not to get a post removed from TheDirty if it’s possible to do so.

How to Still Get Posts Removed from TheDirty

Even though TheDirty is no longer visible in Google’s search results, they have not relented on allowing content to be removed. They hide behind Section 230 of the Communications Decency Act, along with poor record-keeping and anonymity in submissions. All of this means they put as many roadblocks in the way of getting posts removed as possible.

The standard go-to process for getting a post removed from TheDirty is a libel lawsuit or potentially a cyber-libel lawsuit. Libel, being written defamation, is a legal framework that allows you to sue to have the content removed. It’s not easy, and it’s expensive, but it’s still doable.

Of course, if you don’t want to go through the legal process yourself, there are always alternatives. Our removals service is now guaranteed and has been time-tested and proven with over 30 years of reputation management experience. If you have a post on TheDirty and you want it removed, it’s a great idea to reach out for a consultation. 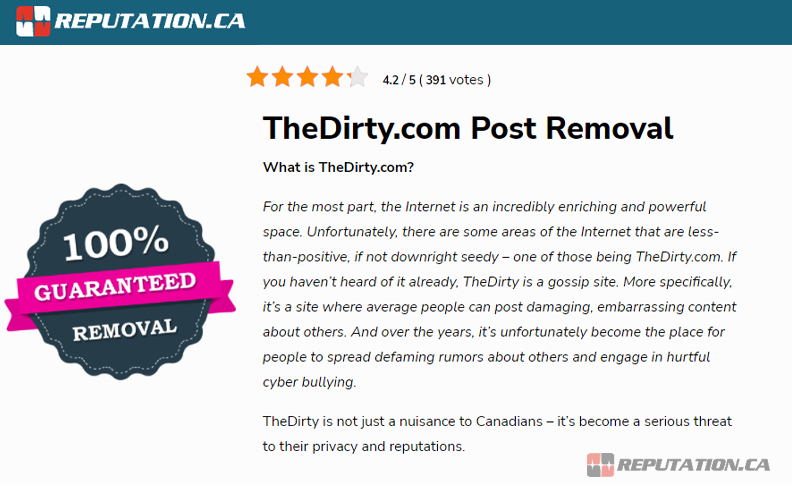 Additionally, posts from TheDirty are often copied on dozens of other gossip sites. Our removals process can help you get those posts, and others like them, removed from everywhere from TheDirty itself to Google’s search results and beyond. If you’re looking to protect your reputation, you’ve come to the right place.

There’s no guarantee that TheDirty won’t be back, sooner or later. It’s better to take action now to get posts removed before they become a problem again.

If you have any further questions or concerns regarding TheDirty or similar, please feel free to reach out at any time! We’d be more than happy to assist you.

How to Remove or Replace an Old Photo from Google Images

How to Email Your Customers and Ask for Reviews (With Templates)